Leslie is returning as Drum Major for her third consecutive year, with Kaia and Alex joining her for their first year in this capacity.

At the end of 2014, the Cougar Band saw the departure of Drum Majors Hannah Mills (Dublin, OH, Major: Public Health, Instrument: French Horn) and Conner Cunningham (Springville, UT, Major: Exercise Science, Instrument: Percussion). Hannah served as Drum Major of the CMB since 2012 and Connor since 2013. Both consistently exemplified the best of the Cougar Marching Band and Brigham Young University.

On behalf of Brigham Young University, the School of Music, and the Cougar Marching Band, we offer our congratulations to Leslie Sampson, Alex Andersen, and Kaia Wallin, and our deep thanks to Hannah Mills and Connor Cunningham for all they have done for BYU and the CMB. 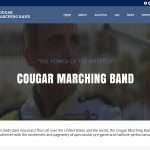